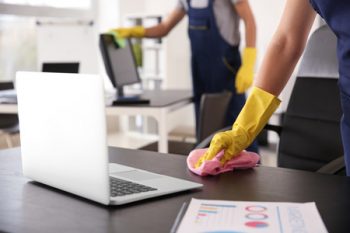 Today’s Best Cleaning, LLC offers premier maid services for office cleaning and the surrounding cities. Your office can be clean at all times if we handle the cleaning and maintenance you require. Our office cleaning will do a full sweep of your business so you can have the peace of mind of knowing that you will arrive at a clean place every single day.

The answer here is yes. Office cleaning can definitely go along way toward promoting better health by decreasing irritants in the air as well as reducing viral and bacterial agents. A healthier environment amounts to healthier employees—which means less sick days!

Office Cleaning You Can Trust

One issue that is always a concern with office cleaning is trust. Cleaners often come into the office when everyone is gone. They need access and are often in the building while everyone else is gone. At Today’s Best Cleaning, LLC, all our employees go through a thorough background screening. We always have a supervisor onsite to ensure quality and safety, as well as acting as the only key-holder. We are also licensed, bonded, and insured for your safety.

Ask us for our list of references. We are happy to pass along the many names and numbers of office cleaning clients that are thrilled with our services. We truly care about customer satisfaction—that’s why we guarantee it! If you don’t like something, let us know and we will come back and get it done to your specifications.

We offer all our office cleaning customers several cleaning package options to ensure you find something to fit both your needs and your budget. No matter what package you pick, we do all our cleaning with an eye for detail. We use non-toxic cleaning agents, to make sure there is no residue left to irritate employees or customers with sensitivities to harsh cleaning agents. When it comes to us, we think of everything.

Our Office Cleaning Services are available in these areas to serve you: